Clean sweep for Leitrim A and B at InterCounty Cup

What a day it was for Leitrim pool Last Sunday 10th March, both the Leitrim A and B teams made their way to Potters Snooker club in Drogheda, Co. Louth to play in their respective All Ireland Intercounty Knockout Cup Championships. The A event was run off over the day but the B event was Provincial so Leitrim beat Roscommon a few weeks ago to become Connaught Champions. 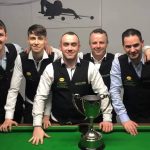 In the A event Leitrim had the reigning Champions Wexford A, this was always going to be a tight match, Leitrim fell behind at the start 6.2 but ended up finding their game and winning 11 frames on the bounce beating Wexford 13.6.

In their Semi Final they face Wexford A1 (a second A team) they fell behind at the beginning of the match 4.1 but got it going and reeled off 12 out of the next 13 frames to win 13.5.

In the final they faced Tyrone A in this match Leitrim were focused on getting a good start and they .. didn’t they went 5.1 down but like before all of a sudden they found their game and won 12 out of the next 13 frames. Well Done to all the Leitrim Lads on a great performance throughout the day, this is Leitrim’s second time to win the event in 3 years, another great achievement for Leitrim pool.

In the B event Leitrim B faced the Ulster Champions Fermanagh A, this was going to be a tight match from the start. Leitrim Won the first session of singles frames 5.4 , in the second session Leitrim were unable to make a sizable lead over Fermanagh and after the Doubles Session of 9 frames it was 10.8 to Leitrim. In the third and final session of singles frames Leitrim needed 4 out of the 9. The next 4 frames were shared between the teams to make 12.10 in Leitrim’s favour. When Leitrim needed a big push to get us over the line we had Richie Shanley to get us to 13.10 and John Casey winning the frame to get Leitrim to that magical 14th frame.

Leitrim now faced Wexford B in the All Ireland Final, Wexford b came through a large and difficult Leinster qualification process. Leitrim knew they had to step up their game to beat the Yellow bellies. In the first session Leitrim went 5. 3 up with a frame left in the session. This was a massive frame for both teams as it was the difference between a 3 frame lead or a 1 frame lead. Dave Flynn playing a long tactical frame was too smart and got Leitrim a 3 frame lead 6.3.

Next up was a session of doubles, here Leitrim kept the foot down and won 3 out of the first 4 frames, 9.4 but the momentum swung and Leitrim only won 1 frame out of the final 5 frames to leave the score line at 10.8 in Leitrim favour going into the final session.

In the final session, Wexford led with a break and finish, 10.9 and followed by another frame so it was 10.10 level game first to 4. Leitrim needed to stop the rot, Hugh Kielty brough Leitrim to needing only 3, 11.10 but Wexford won the next 2 frames to take the lead for the first time in the match. Dave mcweeney brought it back to level terms 12.12. Darren Philips playing super pool all day put Leitrim on the hill 13.12 up just as Richie Shanley landed on a very tough black. Richie had half a pocket to use to sneak black in but it was too tight, 13.13. Dave Flynn was in for Leitrim with the break, from the start he stamped his authority on the frame taking control of 2 pockets. Very composed the whole way he seen he chance to win the frame and went for it, absolutely slapping the black into the bottom left pocket.

A massive win for Leitrim B team, this is their second All Ireland Title in less than 12 months as they were crown Junior All Ireland Champions last March.