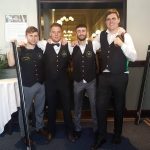 A huge congratulations to Kevin McWeeney who was part of the Ireland U23 team that won out the World title in Blackpool.

The Aughnasheelin man was part of the U23 Irish A team along with the Wexford trio of Adam Maher, Jordan Doyle and Jordan Synott.

In a group with Ireland B and 8 other countries, The A team finished the group in 3rd spot winning 7 out 9 games. In the semis they faced Ireland B and won on a scoreline 5-2. Into the final and they faced England, whom they had already bet 5-4 in the group stages. But in a world pool final the stakes were much higher and experience and ability to perform under pressure would be vital. Ireland started off better going 2-0 and 3-1 up before England levelled at 3-3 going into last session. This best of 9 final was now best of 3.

Up stepped Kevin and pulled off a great finish under pressure to put Ireland on the hill at 4-3. They only needed one more to be crowned world champions again. Jordan Synott duly done this when he broke and dished in the next frame to make it 5-3, much to the delight of the irish supporters.

A huge well done to Kevin and the lads on back to back world titles.