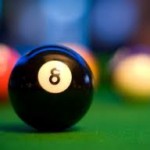 Leitrim’s second Tour Championship event took place on Sunday the 10th of December in Drumshanbo pool hall. A total of 22 competitors took part in what is always a very competitive and intense day of pool.
To kick things off, groups of 2 and 3 players were drawn with the top 2 progressing to the last 16. The first game of the day was Raymond Christie v Hugh Kielty. With a +2 frame advantage, Ray took out 3 quality clearances in quick succession and powered to a 5-0 win. This drubbing eventually proved enough to eliminate Kielty from the competition. Paddy Brady took on Lee Mc Sharry and recorded an impressive 5-3 victory over the Drumkeerin maestro. Paddy is predominantly known for his snooker exploits but in the last number of years has converted to 8 ball and is adapting brilliantly.

Dessie Gardner, one of the talisman of Leitrim B’s recent heroics, was unlucky to draw Gavin Donnelly who is a consistent performer, and go down by a couple of frames. An injured Niall Sweeney had too much in the locker for David Flynn. Brady continued his fine form with a comprehensive win over Chairman John Casey and Darren Phillips caused a lot of head aches for multiple All Ireland winner Kevin Mc Weeney, the latter winning a decider.

The pick of this round not surprisingly was from Lee and Paddy. Lee (who is currently taking a year out from the game due to Leaving Cert commitments) just about conquered the challenge of the inform Brady. Wayne suffered a backlash from Kevin and the dreaded white wash. Gavin displayed his intent and inflicted the same result on Treasurer Maurice Cullen and Niall cruised to a comfortable victory over Darragh.

Semi Finals..
Kevin 6 v 5
Lee 6 v Gavin 4.
Following a similar trend to the previous tour event, there was absolutely nothing to pick from the final 4 players. This is without doubt a testament to the competitive nature of these tournaments. Ultimately it was youth that (just about) prevailed in both matches as Kevin and Lee set up a mouth watering clash of attacking pool for the final. That final will be played at Tour event 3 in the new year.
In the Plate Final, Steven Mc Tague aka Disher Lad, defeated tournament director Richard Shanley on a 4-2 score line. Well done Stevo! Also a special mention to Richard who ran a fantastic competition all day and kept things running smoothly. Finally, many thanks to all the competitors that entered and braved the cold conditions!