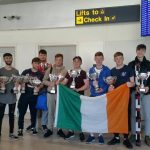 Under 23 and Under 18 World Champions

Between Saturday 24th june and Friday 30th June, Leitrim had two representatives over in Blackpool at the 2017 World Pool Championships, Jamie Gaffney from Keadue was a part of the Irish Under 23 team while Lee McSharry of Drumkeeran was part of the Under 18 team. And what a week they have had as they have both been crowned World Under23 and World under 18 team champions 2017.

To begin the wek the Irish Under 23 team had the worst start possible losing all 3 of their matches on the first day, losing to England B 5-4, Malta 8-1, England A 6-3. Things were not looking good from their point of view but as we have seen in the European Championships earlier this year this is where they are dangerous and they proved so by winning the next few games beating Scotland, Morocco and South Africa. Coming intot he final round it was a big ask for Ireland to reach the Semifinals as they were 2 frames behind Malta, Malta beat South Africa 5-4 which ment Ireland had to beat Scotlan 8-1 or better and they did with a 8-1 victory over the not so flying scotmen. Ireland scraped through by a frame into the top 4 to reach the Semi Final Stages.

In the Semi Final Ireland faced Morocco while England A and B faced off in the other one. Ireland started off well and were always in the driving seat throughout the match and beat Morocco 5-2, they now faced England in the final.

In the final Ireland struggled to get off the line and fell 2 frames behind and before they knew it they were 4-1 down first to 5, but Ireland never let their heads down and dragged the game to 4-4. It was an inspiration on the performance so far and in the decider our own Jamie Gaffney was up to try get the win for Ireland, so far in the match Jamioe had lost his two frames but their manager knew what Gaffney was capable of and stuck with him. In the decider Jamie had the first attempt missed but was not a costly one as the game was tied up, none the less the English man facied it and went to clear the table he had potted his tied up balls and opened up the table but played a poor positional shot and missed a double. Jamie got in and made sure he was going to win for the Irish side. Well Done to Jamie, Jordon, Jordan, Sean and manager Frank on their heroic win from scraping through the final round to fighting back from 4-1 down it was incredible.

In the junior Section affairs were not as dramatic as Ireland showed what they were made of and remained in pole position the whole week, which is a brilliant achievement in itself. The Irish team lost one game all week to Australia but beat England, India , Malta and the first time they played Australia.

They eased into the Semi-final stages on the event and played Malta, the Irish team couldn’t be more confident and rightly so as they had already beat Malta twice this week and they made it a third time beating them 13-8, England beat Australia in a decider in the other Semi Final so yet again it was a World Final Ireland Vs England.

In the final Ireland cruised into a good lead and led 8-5 and 10-6 but England found inspiration and were rapidly eating into Ireland led 10-7,10-8, 11-8, then it was 12-10 Ireland needed 1 frame but England had reduced their arrears to 2 frames but it wasn’t to be for the English side and Ireland did the double on the Friday winning both the Under 23 and Under 18 Championships, Well Done to Lee, Cormac, Adam, Danny, Brandon, Brandon, Captain Ben and Manger Dave McQuillan a super achievement in winning the event as well as showing their dominance in the event throughout the event.